This year we celebrate our 10-year anniversary! As most couples, we frequently ask, “where did the time go?!” (We still don’t have an answer; if you do, let us know!) We are fortunate to be planning our second trip to Europe, and are therefore thinking back a lot to when we went to Europe together the first time, for our 5-year anniversary. The best part of that trip, hands down, was absolutely Ireland. It was our first stop, it was the cheapest (so about 5 points just for that!), and we bring it up more than any other place we went to on that trip.

We therefore want to make sure that anyone else planning to head that way has a few of our highlights, as we would be sad to hear that anyone missed out on these sites and experiences.

Five years later, these are the pieces of Ireland that we remember most today…

1.  RENTING A CAR AND DRIVING IT OFF THE BEATEN PATH

When we planned our trip, we had our Garmin GPS that we realized had cartridges that would make it adaptable in the parts of Europe we’d be driving in. We used Amazon to buy a cartridge, but once we saw the roads I had my doubts. Between the Dublin airport and County Wicklow, there are so many options of little roads to take. As Matt said, “Let’s try this one!” and made a quick turn off of the road that was ON THE GPS, I had a mini panic attack. But, it turns out that the Garmin cartridge knew its stuff! Every small, seemingly insignificant road was labeled and mapped out on our GPS, and we were able to remain on task to arrive at Glendalough, our first stop. I am so glad that Matt is more adventurous than I am, because the first stop we made turned out to be not Glendalough as we had planned, but a tiny little outlet that gave us stunning views of farms, sheep, and green for miles. We got out, crossed the teeny, two-way street, and stood in silence as we listened to the sheep going “baa!” in the distance. It was peaceful and beautiful, and as we stood there knowing that we had three weeks of these types of adventures ahead of this, we were in complete bliss. 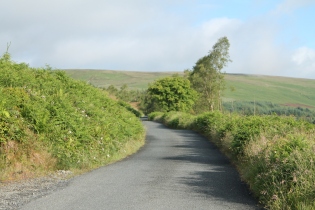 The photos above are all of our first stop, and this little mosaic doesn’t even cover all of them. I took so many because I’m not sure I had ever felt this happy. The photo of the road also does not do it justice; I wish there was something there to give you perspective, because these roads are TINY! And if you’re driving on a different side of the road than you’re used to, this experience will (at first) give you massive amounts of anxiety. Just know that you do not have to go the speed limit around corners (we told people in a pub that we felt pressured to go the speed limit since that’s how it is in the US, and they told us to NOT go the speed limit!) and that people in Ireland are kind, so you’re not bugging people if you go the speed you’re comfortable moving. In the end, if you’re a confident driver you’ll get used to it and be just fine with driving in Ireland and England.

I realize now that some of our favorite moments were of arriving! We were incredibly jet lagged upon our arrival (I believe we arrived around 5 AM our time after flying all night, and it was late morning there?) and therefore HUNGRY. Before Glendalough we stopped for food, and we were served a few of my favorite things: tea with jam and bread and SO MUCH BREAKFAST FOOD!

Little did I know that the caffeine in the tea combined with the lack of water drinking on the plane was absolutely horrible for me in that moment (it took me a few years to figure out how to hydrate well on trips; my body responded negatively to this combination during the anxiety-ridden car ride that followed!), but looking back now I realize that it was completely worth it!
In Ireland, staying in Bed and Breakfasts is the way to go. I am mostly confident that B&Bs all serve Irish Breakfast (while some of them will give an option to opt out and request other meals – check closely on the websites!), and this is enough to fill you up until an early dinner. Which means that with the reasonably-priced B&B and dinner, you pay minimal amounts for food as compared with other travel destinations. We are HUGE breakfast people, and this breakfast was a favorite every  morning in Ireland (with similar breakfast each day in England!). We talk about this breakfast a lot now back in Philly, and have gone to Irish Pubs that offer breakfast just for another taste of Ireland back at home. So good!!!

No surprise here, right!? Here are some of our Irish Pub memories:

-Learning and performing an Irish dance at a Pub!

-Matt having a man talk to him while they were at adjacent urinals (I told you people were friendly in Ireland!)

-Matt hearing someone claim to a friend, “that guy just ordered a water!” when Matt asked for a water for me (with my Cider, FYI)

– meeting a couple who brought us from our secluded corner to sit with them, and having them tell us all about life in Ireland, as well as the best advice we had while in Ireland

– DO NOT drive the speed limit! (I felt complete relief in that moment!) The wife may have been a bit intoxicated but we had fun! (Especially when she got me up out of my seat to dance with her to the live Irish band!)

– We were there in 2014 while the World Cup was going on. Matt talked to a bunch of people around us while I sat and journaled with my drink(s). Some of my favorite times…

That’s probably all you need to read about the pubs… Here are your visuals:

Oh, and the live Irish music at so many Pubs… there’s nothing like it.

Ever heard of ’em!? I hadn’t, until Matt read about the Blasket Islands in Fodor’s Ireland 2014 Travel Book. We booked a ferry before we left the states, and are so glad that this made it into our itinerary. 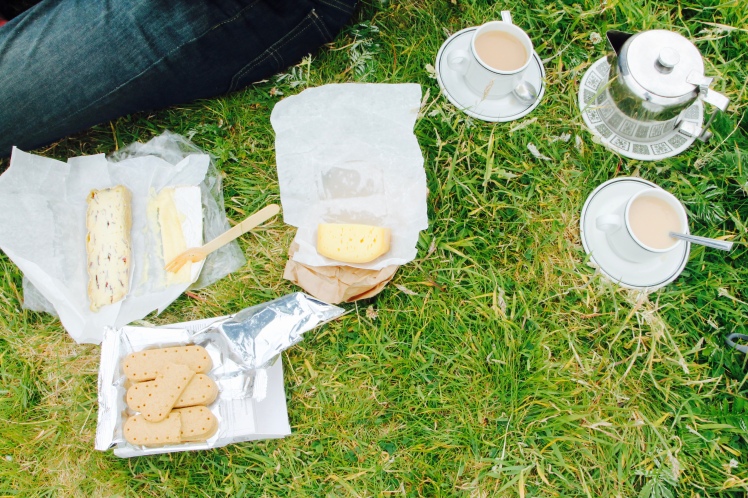 Before boarding the ferry we arrived early and stopped at The Little Cheese Shop in Dingle to buy some snacks! (Cheese.) Above you will see the result of our purchase (minus the tea, which we purchased on the island after we landed!), the view from Dingle to the Blasket Island, and the view of an adorable street of Dingle.

The ride is fun – the boat is small, and family members of the family who runs the island run the boat tour. (We had a man a little older than me at the time {27} who looked like Prince Harry – he was beautiful.) Once on the island we bought tea at a small tea shop and explored. Sadly there wasn’t amazing weather that day so although we were prepared with rain jackets, the light, cold mist put me in a cranky mood and we took an earlier ferry back. (Got lucky – there was room on an earlier ferry than what we had booked!) But we had such a nice time – sitting and eating cheese, sipping tea, and looking out on an incredible view made for a pristine day. 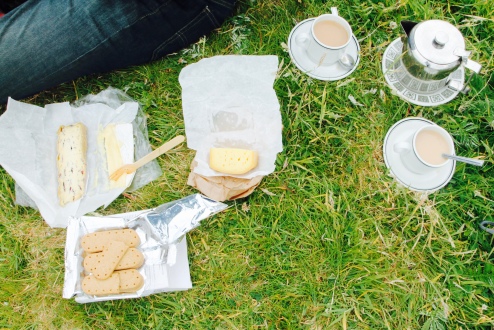 The top two photos take place in Dingle while waiting for the ferry, but the rest are on the Blasket Island. I WANT TO GO BACK!

When we bought our tickets, we had tickets to see the Cliffs of Moher and Bunratty Castle, all-in-one. The Cliffs of Moher were great, but it was cold and rainy so I was cranky and do not include that experience in my list. But, here’s a photo:

Other people have MUCH better photos of the cliffs. (And to be fair, much worse; I am sure we did not arrive at the worst weather conditions, but it was quite foggy.)

After visiting the cliffs (quickly!) we headed to Bunratty. We had tickets to Irish Night, and arrived a bit early. We must have had an angel check us in because as an earlier dinner event was going on, there was NOBODY on the grounds and they sent us off to explore the grounds BY OURSELVES! We were the only ones walking around, and as someone who was just trying out her new camera, I was ecstatic. Matt was kind and posed for ridiculous photos with me (see below), and I was able to take fun shots of Bunratty, which is a (staged) traditional Irish town. Once again, Ireland put me in my glory!

And then it was time for Traditional Irish Night, and we were seated with fellow Long Islanders! (We’re currently Philadelphians, but having grown up on Long Island we were pleasantly surprised to be with people we could have meaningful conversations with! The waitresses and waiters were also performers, and were incredibly polite and friendly. (When I told our beautiful waitress we were heading to Dublin the following day, she told me that I would find the best shopping there and that she and her girlfriends went there frequently. Then she left me to go dance on stage!) I highly recommend a dinner performance at Bunratty in addition to exploring the grounds (with a camera).

(Our waitress is on the right in the last photo.) Oh, and I forgot to mention – unlimited wine with dinner! And the sign?! Inside the dinner theatre. Such personality!

Those would have to be the *top* five things that we recall most, but Ireland is chock full of incredibly memorable experiences… 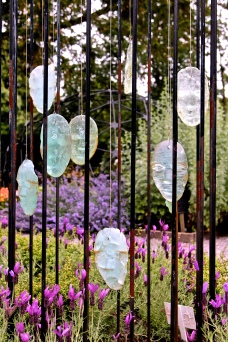 …the Poison Garden at Blarney Castle…

…the Gap of Dunloe tour, complete with bus ride(s), hike, and boat ride… 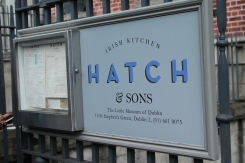 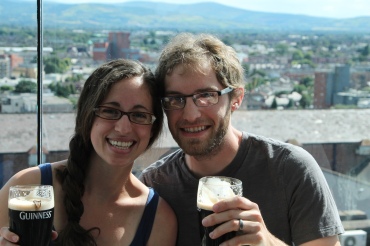 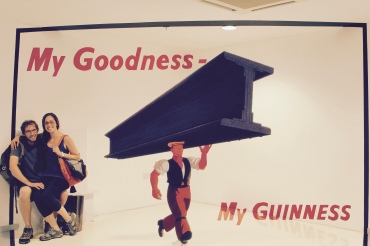 …and last but not least Dublin, where you can eat a beyond-delicious meal at Hatch & Sons (where you will take photos of food that will reside in your kitchen years later!), go to Trinity Library and see the place you will only ever *wish* you could live in with so many books, and of course go to Guinness where you can drink the best Guinness there is and pose for a catchy photo.